There are xx species of baleen whale or mysticetes to be seen in UK waters. Some of these are quite common and seen inshore quite frequently whereas others are principally deep water or off-shelf species and in some cases are seen only rarely. It should always be borne in mind that there is always a first time for anything and it is always a possibility, however remote, that you might be seeing a never before recorded species or a vagrant, far from its normal habitat. 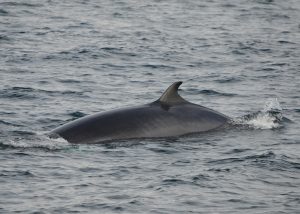 The smallest of the “great whales” with a diagnostic white band on the pectoral fins, a sharply pointed “snout” to the rostrum and a curved, dolphin-like, dorsal fin. The upper body is mid to dark grey, with pale chevrons visible in good light, located in the front third of the body and white lower flanks and belly. Minkes do sometimes breach but generally surface with an arched roll after the sharply pointed rostrum breaks the surface and the blow is low and usually barely visible.

Key Areas: Widespread but the Hebrides (Scotland) and Yorkshire (England) are hotspots from late spring to early autumn.